The king is dead.  Long live the king.  The storm I reported on in “Let it snow, Let it snow, Let it…OK enough already!”  claimed a casualty here at home.  At 264 feet high, 46 feet around, and over 1,000 years old, The Advocate Tree was one of the oldest and largest in the Nisene Marks State Redwood Park which is at the end of my street.  When running the trails in Nisene either alone or with friends, I would often take the short spur off the main trail down to visit the tree.  I would place a hand on its shaggy bark and look up.  You couldn’t see the top.  It was too tall.  It had a burned out section that you could go into.  You could actually stand up inside the trunk.  And still, it lived.  When there was a group of us, we would clasp hands and see if we could stretch all the way around the trunk.  We never could.  It was just too enormous.

Such a tree seemed utterly permanent.  Sempervirens.  Even the Latin name means, “lives forever”.  It is dead?  How can that be?  It was a big storm but an even bigger tree. That tree was alive during the Norman conquest of England and while Marco Polo plied the seas.  The Bubonic plague did not affect it.  It continued to grow quietly while the Incans built their empire in Peru.  It chuckled when Copernicus hypothesized about the planets circling about the sun because it already knew.  This tree reached for the sun when Shakespeare wrote “Hamlet” and stretched its roots into the earth as Mozart composed his first symphony.  Did it take note when Edison invented electric light?  My eyes can see that it has fallen but my mind still can’t believe it.  It feels like a great loss that something so old, so timeless, something that seemed to be immune to the laws of nature and the ravages of time, shall see no more.  In  honor of our fallen giant I give you a paragraph from Shel Silverstein’s “The Giving Tree”.

Post Script:  This morning there was a break in between storms.  I ventured out to survey the park and hopefully get a photo of the fallen Advocate.  The dubious trickle that is usually the Aptos Creek had become a raging torrent.  As I poked along the banks, looking for a way across, there was a “CRACK”.  Being uncertain exactly where the tree that was falling was headed, my mouth made a little “O” and I flapped my arms a few times.  I conclude that this is a successful tree evasion technique as the tree fell away from me and not on top of me.  I took a photo from a safe distance.  I have not yet been able to get to the Advocate but will post a picture when I do. 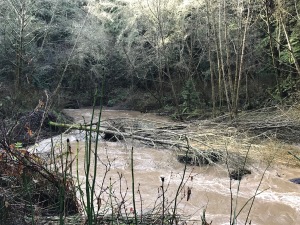 One thought on “Once They Were Giants”