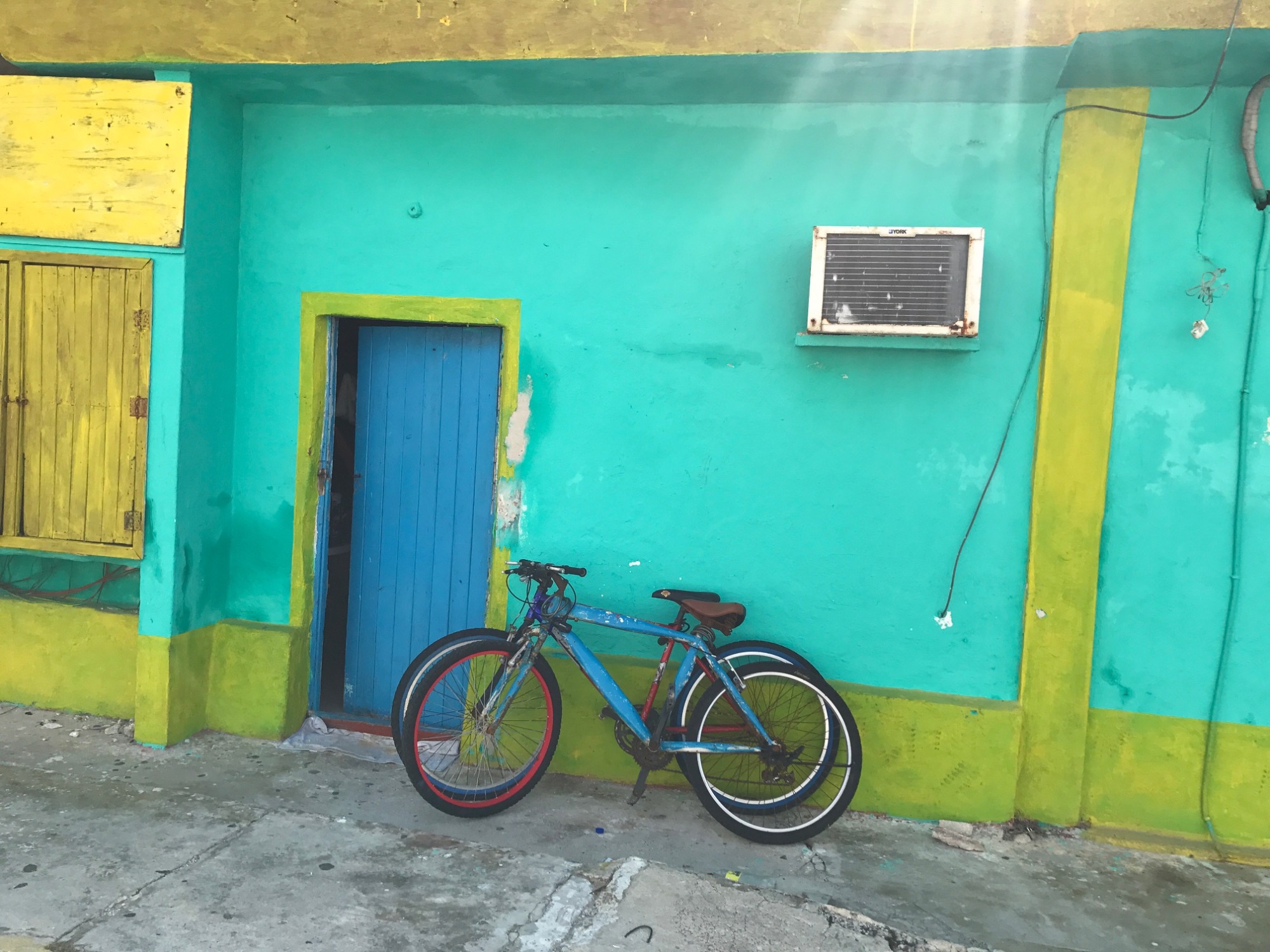 Every June through September whale sharks gather off Isla Mujeres to feed on plankton and the eggs of spawning bonito.  Whale sharks are the largest fish known in existence. They are the size of a small whale but are considered a fish or a shark because they breathe through gills.  The largest whale shark ever recorded was measured at upwards of 40 feet long and weighed over 66,000 pounds.  They are filter feeders meaning that they swim along with their giant mouths open catching tiny prey, close, squish the water out and swallow what’s left.  They are of no danger to people and are gentle giants of the sea.  The gathering of the whale sharks was one of the major draws of Isla Mujeres for me.

There was no lingering in bed with coffee this morning as I had to report to the dive shop at 7:45.  We had a minimum of an hour boat ride out to the feeding grounds.  The sky looked so blue and the sun beat down at 85 degrees at this early hour making me grateful I had brought my giant straw hat.  And yet, maybe 20 minutes out, we hit the most incredible storm squall.  The boat heaved to and fro, the wind howled and rain slashed sideways, soaking us through in an instant.  The prow rose up and crashed back down again and again with shudders and explosions of white water.  I put on my wetsuit to stay warm and others put on their snorkel masks because it was impossible to see!  Our captain marched bravely on knowing that tropical cloud bursts like that don’t often last long.  And sure enough, maybe 20 minutes later the sun was out again as if nothing had happened.

When we found the feeding group of sharks, it suddenly occurred to me that I was expected to jump out of a perfectly good boat directly in the path of a 20 foot animal with its mouth open.  My palms grew sweaty and my mouth went dry.  They asked who wanted to go first.  Not it.  I know they have no interest in eating me but what if I jumped and he blinked?  What if I got sucked in on accident because he didn’t see me?  I feigned generosity and let everyone else go first.  But I really just wanted to see if they got eaten.  The downside of volunteering to go last was that the boat pitched and swayed and went round and round in circles trying to jockey for the best positing to dump the swimmer in directly in front of the whale shark.  This had roughly the same effect on me as the teacup ride at Disneyland.  I’m afraid I made a not very lady like urp into the ocean.  Then it was my turn and there was no dilly dallying and I had seen that if you hesitated they’d just push you in.  I prefer to go in the drink of my own volition so I did my best to shut off the survival instinct part of my brain which was shrieking at me and flung myself into the ocean to see a lot of bubbles and then a giant mouth, and then a tiny eye which appeared to be (thank God) open and then meter after meter of polka-dot skin.  I swam vigorously after the tail for a few moments but there is no keeping up with a hungry whale shark on the move.  I paused and my guide was frantically motioning for me to turn around.  My heart stopped as I was certain it was a blinking whale shark coming right at me with it’s mouth open but it turned out to be a giant manta ray.  It gave a few flaps of its underwater wings and sailed past.  Really the whole experience was over in a matter of moments but it was so exhilarating I will never forget it.

The next day I was 100% ok sleeping in and having coffee in bed.  Around 9ish the other guests at Casa Sirena started appearing, somewhat fuzzy eyed in the courtyard for breakfast.  The hotel has this delightful woman cook up vegan breakfasts which are a top contender alongside the top shelf happy hour on the roof for why this is the best hotel on the island.  Today we had fruit smoothies, plates of diced fruit sprinkled with agave, cinnamon, and chile, and hand-made tortillas stuffed with sautéed hibiscus flowers, sweet potatoes, onions, and zucchini.  A spicy avocado sauce was drizzled over the top.  There were shiny clean plates and no complaints about a vegan breakfast.

I had rented a golf cart for the day and was looking forward to exploring the rest of the island.  Ryan who owns a vacation rental home on the island needed to get to his house which was on the other end of the island.  We traded favors.  I’d give him a golf cart ride to his house and he could be my guide for the day.  Despite the fact that the golf cart would unceremoniously back fire every time we went over a speed bump, it was delightful to buzz around in the sunshine, the wind in my hair, the sparkling Caribbean right there.  We explored the cathedral, poked around in shops, drank fresh watermelon juice, drove around some more, ate giant steak burritos, backfired a few times and eventually ended up at Ryan’s house which is at the southern most part of the island. There is a walking path there, that goes past a small remnant of a temple to Ixchel and down to the sea.  The path goes right next to the ocean and the waves slap up and over at times.  The water is so clear you can see fish and turtles from where you stand.  Somehow the day had slipped by and my golf cart was due back in town.  I said adios to Ryan and toodled slowly back along the coast absorbing the sunshine, wind, and sparkling water like a sponge.

One thought on “Golf Carts and Polka Dot Sharks”