“Fig” according to the Collins Dictionary:

1. any moraceous tree or shrub of the tropical and subtropicalgenus Ficus, in which the flowers are borne inside a pear-shaped receptacle
2. the fruit of any of these trees, esp of F. carica, which develops from the receptacle and has sweet flesh containing numerous seedlike structures
In British slang to “fig up” means to dress up.  And check this out.  “Figging” is the act of administering stimulating drugs to a horse.  Who knew there was need of such a word?
The fig tree has played a large role in religion and myth throughout the world.  Adam and Eve were said to have used fig leaves to cover themselves when given consciousness and knowledge.  The Buddha obtained enlightenment while sitting beneath a fig tree.  The Vedic people sang about fig trees in their battle hymns 3,500 years ago.  The Egyptian goddess Hathor was said to emerge from a fig tree to welcome the pharaoh’s soul into the afterlife.
Figs are nutritious, delicious, and have medicinal properties according to the healers of old.  So many animal species depend on figs that ecologists call the tree a “keystone resource” meaning that the fig tree is one of the pillars that props up the web of life.  God forbid, they should disappear.
While our ancestors and the animals are all about figs, modern-day folks…well, not so much.  I live in the redwood forest which is not a suitable environment for figs.  They need all day sun and heat.  So, I sidled up to my friends who have fig trees with a “Sooo, how’s that fig tree of yours doing?”  Most people say, “Great!  It’s loaded with figs but I don’t know what to do with them so I just let them fall.”  This is my cue to invite myself over for a fig picking party.
Here are a few of the things that I like to do with figs. 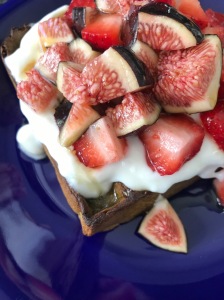 A crisp Belgian (gluten-free for me) waffle smothered in yogurt and topped with figs and strawberries.  A drizzle of maple syrup is acceptable if the fruit isn’t sweet enough for you,but try it first.  Did you know that before refined sugar, figs were used to sweeten and moisten baked goods? 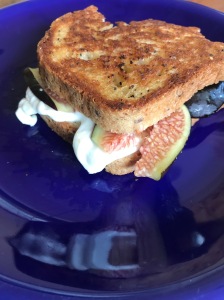 A grilled goat cheese sandwich.  Load on the cheese, sprinkle with fresh rosemary, thinly slice a fig or two and toast in a pan till crispy and golden on the outside and the cheese is melty and gooey on the inside.  Your eyes will roll.  It’s that good.

Lamb stew.  I admit, this isn’t a picturesque dish.  What it lacks in looks, it makes up for in taste.  Ground lamb, tomato, eggplant, and figs.  Dish this over a bed of rice for a meal and your taste buds and belly will thank you for it.

Figs, goat cheese, edible flowers, and a mix of baby greens make for such a beautiful salad, it seems a shame to eat it.  Figs, while sweet, are technically not a fruit.  They are the flower of the fig tree turned inside out!

Last but not least, dessert.  In fact, one of the joys of being a grown up is that sometimes I eat dessert first.  Especially this one.  I saw this idea in Sunset Magazine a few years back and have been making it ever since.  Everyone loves it.  Melt the chocolate of your choice in a glass dish in the microwave.  Add a splash of olive oil.  Snip the stem off the fig.  Dip a wooden coffee stir stick in the chocolate and then push it into the top.  Roll the fig in the melted chocolate and set on a baking sheet covered in wax paper.  Flick a bit of large grain salt on the figs.  Set in the fridge for about 15 minutes to harden.  Hint: you may have to trim the bottom of the fig so it will not fall over like a weeble wobble.  Even your pickiest or most calorie conscious guest will not say no to these.

Alright, class.  That’s it for today’s session.  Hopefully next time you encounter a fig you will be inspired to try it out.  Bon Appetit!

One thought on “Figs”