I recently had the opportunity to spend a long weekend snowshoeing in Yosemite with my friend and her partner as a celebration of her birthday.  Our trip landed perfectly in between big storms and our hours of crunching through the snow were rewarded with some smile inducing vistas and plenty of moments for me to pause and ponder.  There is something about the reverent silence of a forest blanketed in snow.  It makes me quiet, it makes me thoughtful.  It feels magical, as though it would be perfectly reasonable for Tumnus the Faun to step out from behind a tree with his umbrella and a parcel under his arm.

At home, I had, of late, been listening to audio recordings by Dr. Clarissa Pinkola Estes called “The Joyous Body”.  I’d filed away the information I’d been hearing in the back of my brain till I could think, really think about it.  The hours we spent snowshoeing provided the perfect opportunity for wondering and wandering.

My spiritual upbringing taught me that the body was an evil thing, full of lusts and wants that were sure to lead to your ultimate destruction.  The body needed to be ignored at best, physically beaten into submission at worst if you were one of the ancients who took self-flagellation to  heart.  While the church no longer condones whipping one’s self physically, mental self-flagellation is alive and well.  We pummel ourselves until our minds and spirits are black and blue for having bodies that have natural functions, needs, and desires.  The body is looked at as nothing but a carapace that will be left behind anyway, so pay it no mind.  Part of it seems true to me.  The body doesn’t last forever.  Perhaps I should be spending more time and money and energy on my inner life.  Supposedly this is the part of you that goes on forever.  Does it not make sense to invest in the eternal?

My eight years as a triathlete wasn’t so dis-similar.  The body was weak, a thing that needed to be overcome.  You had to ignore its pain signals and cries for rest to reach the goal.  I remember once, after months and months of training for a big race, in the middle of a long bike ride, glancing over at the ditch on the side of the road.  I was struck by the thought that if I could only hit a rock or a pot hole and fall down into the ditch, then at last, I could just lay there and rest.  I was so, so exhausted and bone weary, that I longed for this.  But I didn’t.  I turned my eyes back to the white line of the bike lane and struggled on.  I “succeeded”.  Part of this makes sense to me too.  How will you ever accomplish anything difficult if you listen to your body?  Isn’t the body naturally lazy, preferring rest to work?  What doesn’t kill you makes you stronger.  Right?

Beauty.  I like to think of myself as somewhat “natural”.  I don’t wear fancy clothes, or high heels, or much make-up.  But if I’m honest, I’m highly attuned to the appearance of any unsightly vein, a mole, any errant hair, a new jiggle, and take immediate measures to counter-act.  Am I too worried about my appearance?  I pluck, wax, pedicure, exfoliate, and hair do right up there with the best of them.  Maybe not so natural…

When I was 14 or 15 my appendix ruptured and I nearly died.  The emergency surgery left me with a six-inch scar down my abdomen.  For 30 years, I ignored or brushed off people’s stares and comments whenever I would wear a two piece bathing suit.  But a couple of years ago, I was scuba diving in Mexico.  I was walking across the beach parking lot and I encountered a man I thought handsome.  I had been very closed off to relationships and would normally look at the ground and walk away.  I decided to practice being open and brave.  I smiled at him.  I watched his eyes travel from my face to the scar on my belly and watched his face recoil in disgust.  Something inside me crumpled.   I looked at the ground and walked away.  I went home and bought a one piece bathing suit.  In the past I had interpreted the stares as curious.  I hadn’t thought of myself as gross.  A thing to inspire revulsion or disgust.  It hurt badly to learn I could be looked at this way.

My interest was piqued while listening to “The Joyous Body.” The author consistently refers to the body as one’s holy consort, one’s faithful travelling companion.  That it is precious and beautiful, designed for joy and pleasure and that one should listen to it and treat it with great care and love.  She says we should treat our bodies as if they were someone elses -a child’s or a lover’s.  Someone you care about greatly.  If it were someone else’s body, would you say unkind things about it?  Would you starve it?  Overstuff it with bad things?  Ignore it when it was tired and cold?  Certainly not!  Why then, do we do these things to ourselves?

She wonders aloud about the cultural norm that says that the skin must be unmarked and unbroken to be considered beautiful when in nature, every creature that has lived has scars and marks.  Think of the small and twisted Bristlecone Pine.  It lives longer than anything else on earth and is gnarled and twisted by the wind.  It is fascinating because of, not in spite of, this.  Think of the skin of a whale.  Is it less beautiful for the network of scars and marks that run down its sides?  Of course not.  Who would ever even think of that?  Rather, it makes us wonder about the story behind them.  And the moon.  While not alive, she is luminous.  Is she made smaller or less by the scars that pock her surface?  The places where meteorites have struck her back and chest-do these make her ugly?  Never!  What a ridiculous thought.  Why then people?  Why are our scars, marks, and wrinkles not simply evidence that we are alive-that we’ve been here?

Do I pay too much mind to my body or am I not listening to it enough?  I’m not sure.  Most of us are a bundle of walking contradictions.  I appreciate that the other creatures in nature don’t spend time wringing their hands or pulling their hair over the “right” or “wrong” of taking care of their bodies.  They simply are.  They eat, mate, sleep, and poop when they need to.  The recordings I am listening to resonate.  They made me cry.  I think I will listen.  I think I will crunch on through the snow, grateful for the strong legs that carry me forward, pay no mind to the big scar on my abdomen because why would that even matter, listen to my belly when it rumbles for lunch time, and take pleasure in the company of my travelling companions. 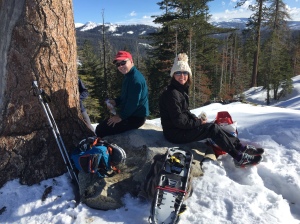 4 thoughts on “Wondering in the Winter”