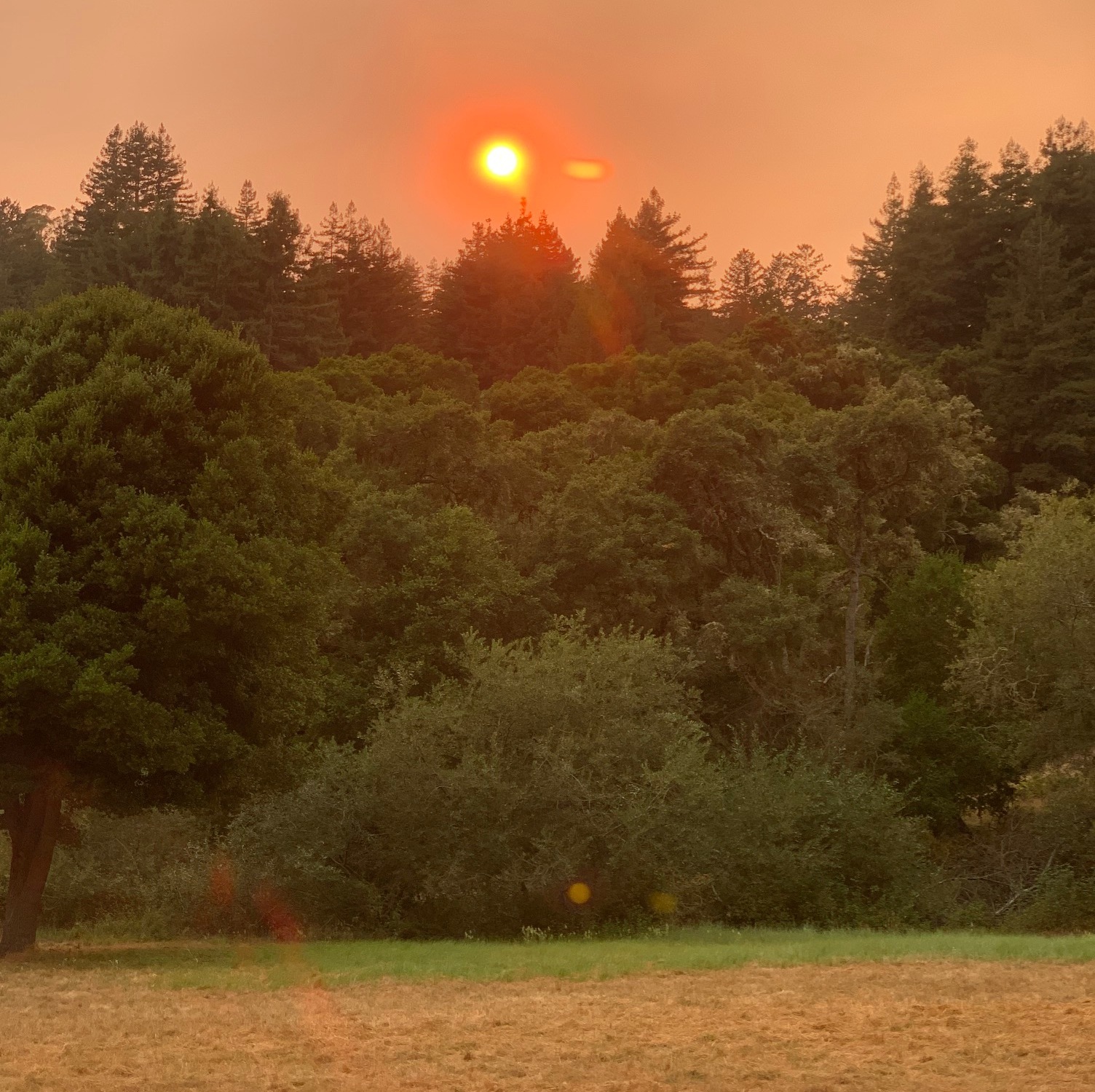 On Saturday, August 15th I returned home from a week of mountain biking and hiking in Bend, Oregon. California was having a heat wave that reached even to the depths of the redwood forest where my cabin in the woods usually remains cool and damp, the domain of mosses and banana slugs. I slid open all the windows, and tired from my travels, fell into bed.

At 2:30 in the morning, I was awakened by a roaring noise. Unable to place it, I got out of bed to investigate and went to the open window. The sound rose to a higher pitch and a sudden blast of wind stripped a nearby tree of its leaves. They pelted the screen with a rattle and stuck there shivering like fingers scratching to get in. I startled and stumbled backwards. Now fully awake, I realized the howling was the wind and I watched the silhoutte of the redwoods thrash and bend before it. Then the sound of cracking, snapping, and breaking limbs, a buzz and a pop as the power was knocked out. Starting to panic, I jumped in the closet (my go to hiding place for earthquakes), but realized that if a tree was going to fall on my house, hiding in the closet wouldn’t be helpful. I darted from the bathroom, to the kitchen, and back to the bedroom, trying to decide where to be safe. In the end, it was going to be luck of the draw so I went back to my bed and sat there in the dark, watching, listening, and anxiously chewing my nails. I thought I might die from a tree falling on my house.

There was a sudden flash of light and I thought “Crap, I bet this wind storm just blew a transformer.” But then there was another, and another, and another, and another, on and on, the sky flashing and blinking like a broken Christmas tree. I ran back to the window hoping if I stared hard enough I could figure out what on earth was going on! My heart thumped. Whatever it was, there was nothing normal about it. It felt angry and threatening. I honestly thought, “Oh. No. We humans have finally done it. We’ve pushed Mother Nature to the brink and it’s too late. She’s had it. She’s going to wipe us out. This is like a Hollywood climate crisis movie, but it’s actually happening.” Maybe 20 minutes later the thunder arrived. The entire house shook, the windows rattled, and I gave a little yip and dove back into bed, the sheets pulled up to my chin, trembling with adrenaline and fear. Now I thought I might die from a lightning strike. The sky continued to flash without pause. It was impossible. We don’t get lightning in coastal California. But there were something in the neighborhood of 12,000 lightning strikes that night. I only stopped seeing them because the sun came up.

About 24 hours later when the power was restored a glitch with a power line started a fire in my vicinity. I had just texted some friends in Maui saying that I had heard there were fires to the north and south of me but that I was in no immediate danger. As I tapped send, I heard the wail of sirens and through my kitchen window, past the trees, watched a parade of fire trucks head up my road. “Hopefully it’s someone with a heart attack,” I thought rather selfishly. But then came the “whup whup” of the helicopters. I could see them hovering out my skylight windows with their tell-tale buckets. “No, no, no, no, no” I texted a neighbor further up the hill. She confirmed fire and that they were packing the car. That was all the incentive I needed. My bag was still packed from my trip to Oregon so that went in the car. I also loaded my favorite bicycle, my laptop, my passport, and grandma’s pearls. It’s sort of interesting, deciding what you would choose to bring, if you only had a few moments and could only bring what you could fit in your car. A whole lifetime of collecting “things” and then what does it boil down to? Not much really. I spent the night with a friend in town and the fire was put out by the next day. But it was only the beginning.

The freakish lightning storm had set fires all over California. A homeless person started a campfire that got out of control in the redwood park at the end of my street. An arsonist set fire to the Big Sur coast. I awoke each day to yellow skies and the smell of smoke. There were days of texts and phone calls with friends who lived in the more remote mountain area of Bonny Doon, reporting evacuations and homes being threatened by the flames that marched over the ridge tops. The hospital where I work started a collection of scrubs for employees who had been displaced or lost their homes-in addition, of course, to dealing with Covid. Wailing sirens and the whup of helicopter blades became everyday background noise. One day the smoke was so thick the street lights in town never went out. It was a day of perpetual twighlight, and they called it “the day the sun forgot to rise”.

It got more personal yet. I received word that my brother, his wife, and their two little boys had been rousted from their beds at 3:30 in the morning. There was a fire in the grassslands near Sacramento where they live, nearly 3 hours north east of me. The fire was within a mile or two of their neighborhood. A stunned phone call while I was at work. My friend Shannon had evacuated her mountain home “just to be safe” but hadn’t really brought much as she didn’t really think they were in danger. But no. The house was gone. A late night call from Just Pat. The fire had surrounded his home in Bonny Doon, his neighbor’s house was on fire, a propane tank had exploded, he was on his way down the mountain and could I watch his little cat Peanut? It felt like the whole world was on fire. I kept thinking back to a dream I’d had a month prior. I dreamed that I’d watched an meteor hit the earth. It was supposed to pass by harmlessly, but it got closer and closer, bigger and bigger and by the time it hit the earth, it was a ball of flames. I turned to a stranger standing next to me in the dream and said, “We may have just witnessed the end of life as we know it.”

A couple days later I got a text. Just Pat’s house had burned down. The house he had built with his own hands, raised his family in, and had called home for over 30 years. The house were we had just done our Covid Camping trip a few months earlier-Hummingbird, Twinkle Toes, and Just Pat. Incredibly, Just Pat maintained his favorite saying was still true. Health is wealth and less is more. Here’s to you, friend. You’re an inspiration.

I haven’t been writing much lately. I think Covid and the fires and the election, and all the civil unrest just sucked the creative spirit out of me. But I’ve decided to do a small, local bike ride that is a fundraiser for the folks in Bonny Doon who lost their homes. On December 12, 2020, a handful of people will ride up the Highway 1 coastline, rain or shine, in a show of solidarity. It feels good to have something concrete to do, to try and help others who have suffered far more than I.

May this find you and those you care about safe and well.

One thought on “The New Normal?”